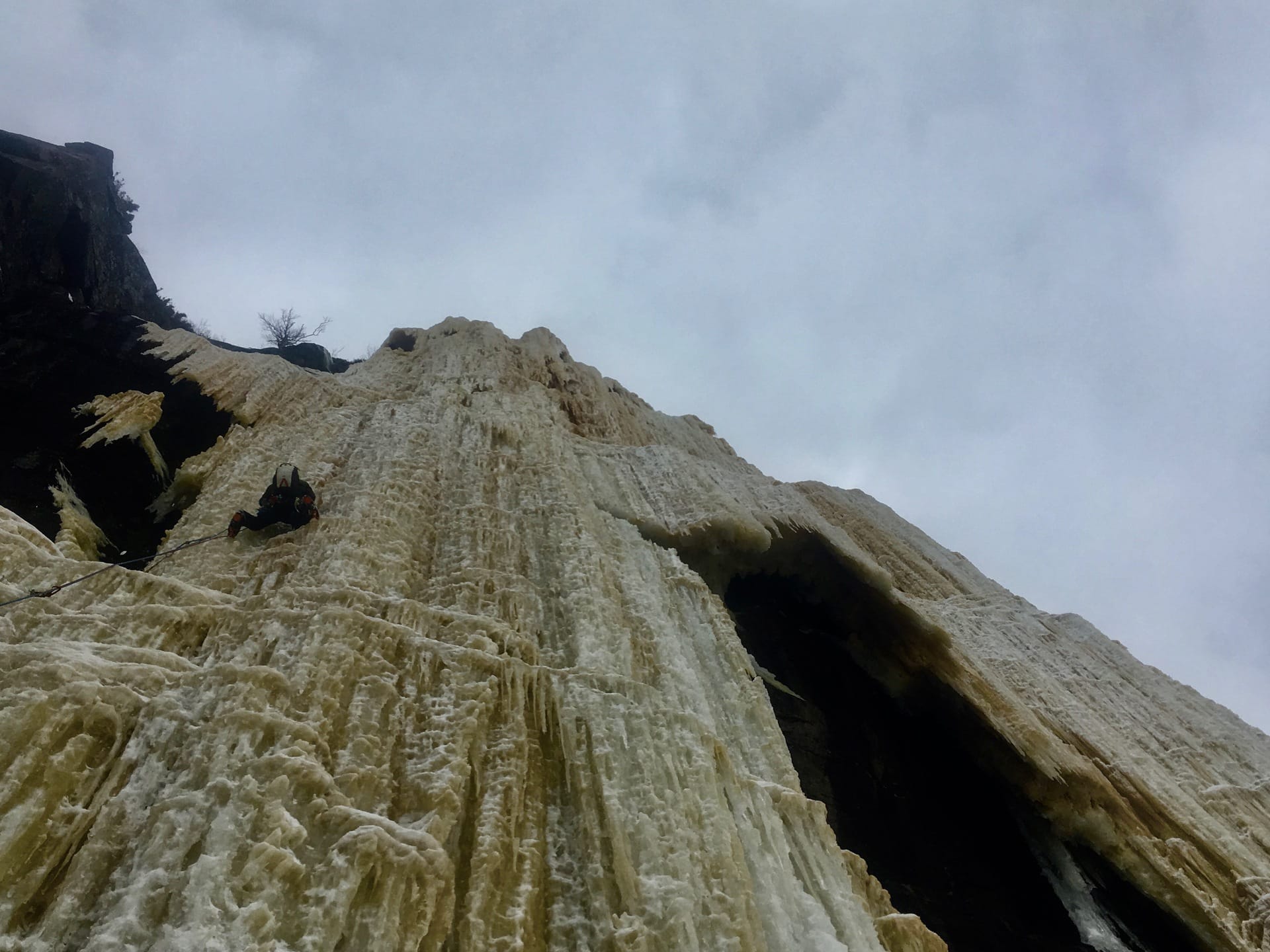 Freddie on the steep headwall. It was like climbing 1200 feet of swiss cheese.

In 1980, New England hardman Kurt Winkler stole across the border to snatch the first ascent of Pomme D’or, one of the finest ice climbs on the east coast. This must have smarted the locals as much as the 2012 robbery of 10,000—10,000—barrels of maple syrup from Quebec’s reserves. Winkler’s guiding the FA might have even stung as much as the 1759 battle for Quebec City, when the French lost to the British during the French and Indian War. It’s been nearly three hundred years since the surrender. They still insist on speaking French.

And yes, in case you were doing double-takes, Quebec has a massive warehouse brimming with barrels of maple syrup. It got robbed.

Sticky warehouses aside, I love Quebec. The old city is gorgeous, the people are wonderful, the food is wonderful. It’s a little slice of history five hours away; a great place to sling my disintegrating French towards a long-suffering group of locals.

Yankees are Yankees, though, and it was with thoughts of thieving that Freddie Wilkinson and I crept across the border to the land of poutine, historical battles, and massive ice climbs. We’d snatch a coup ourselves, like Kurt Winkler or General Wolfe or those brainy bastards who stole all that syrup. We wanted to zip up, climb the Pomme, and zip back down to ‘Murica in around 48 hours.

I was having a hard time focusing on ice climbing. In fact, if we didn’t swing our tools once, the trip would have been worth it. If you’re going to spend seven hours in the car with someone, it may as well be Freddie, alpinist and writer extraordinaire. His excitement is normally ramped up to threat-level-orange, but this was a special case. He had never crossed into Quebec. He was a dad with two days off. And what with Last of the Mohicans and all, the French and Indian War is one of his favorite topics.

“I mean, Michaelchuck, just look at this place,” Freddie gushed from the passenger seat. “It’s all so familiar, and yet so strange!”

We hummed on about the French and Indian war, about the massive pillows of snow that seem to bury this country for eleven months of the year. Men and women scurried across the streets wearing snowsuits Shackleton would have shot his best dog for. 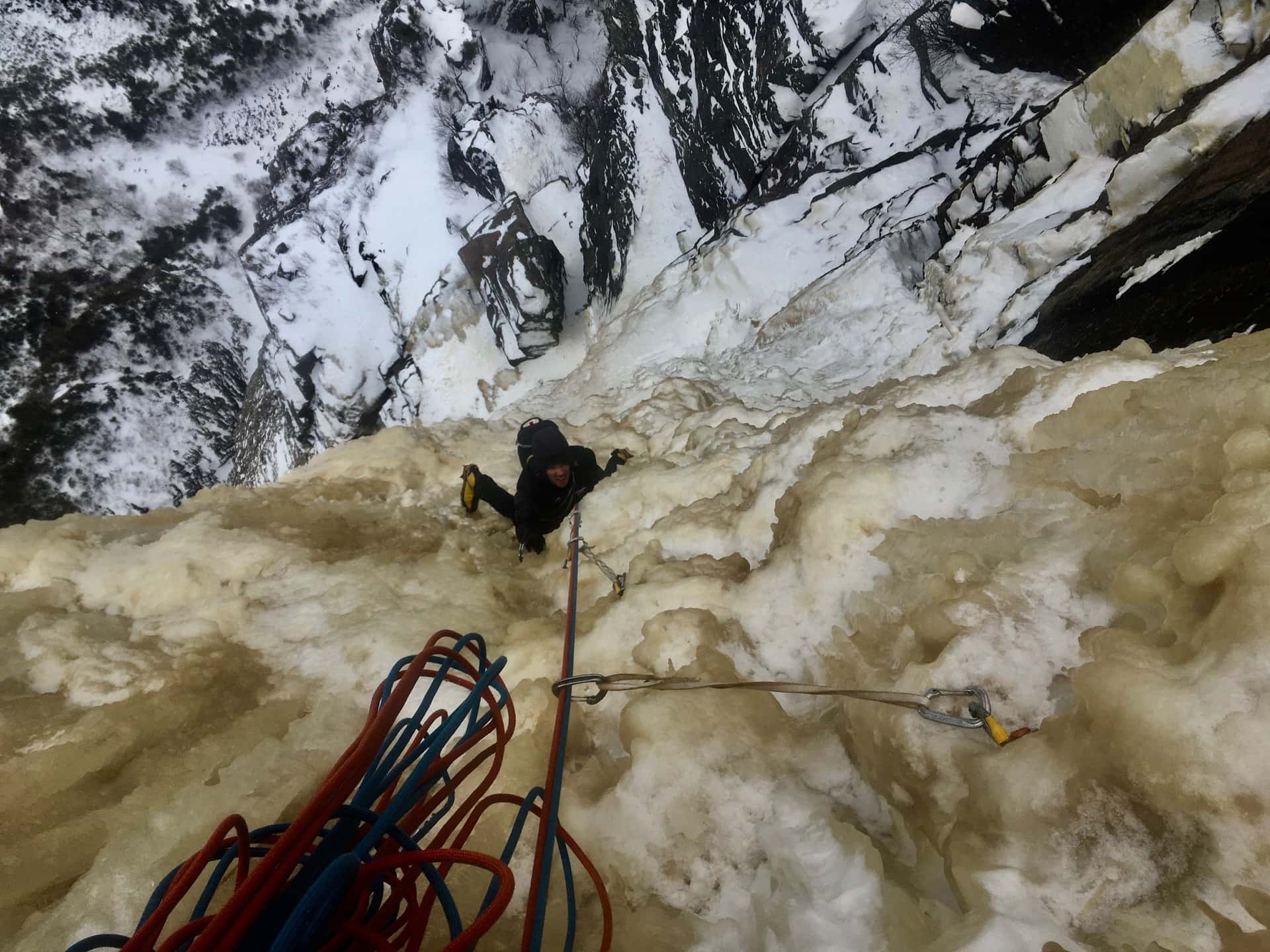 We broke up the last pitch, because I have pencils for arms and we never separated the ropes. Freddie rounded the corner and cumbre’d.

I wasn’t sure how we’d fare. Our mission was an ad-hoc addendum to winter as it was. Climbing this type of steep ice isn’t something either of us practice a lot of anymore. Neither of us could remember the last time we’d been to Lake Willoughby. For nourishment, I’d had a half-liter of water, two bowls of poutine, two cheeseburgers, and four beers since arriving in Canada. (Steve House just exploded somewhere) Freddie’s ice pick had bent somewhere along the way and when you sighted down it, it looked like a banana.

“Just keep it in your good hand,” I offered.

We showed up in the parking lot at 6 am. Two cars were already there. We saw headlamps and skis and ski boots strewn across the little gravel lot. Damn. But beneath the veneer of their alpine start, the climbers didn’t look that ready. One was nowhere to be seen, probably releasing bowels in the woods. Sleds, packs, pads…what the hell kind of game were they playing? Our bags and skis were on before the climber had pulled his pants up.

“We are going to climb the Pomme, and we will be quick,” I announced. Finally! The thievery we’d come for! The poor Quebecois stood with his hardshells halfway on, staring at us with his headlamp beam. He looked as if he’d just discovered 10,000 barrels of maple syrup were empty. Say what you will about my climbing ability (read: piss-poor), I can usually approach climbs quickly if I want. We threw our rucksacks on, clipped into our skis, and we were off, the prickling thrill of maintaining the lead propelling our skis forward.

These long ice climbs are fun. You can just shut your mind off and climb. We fell into a rhythm, swinging leads up the beast as the sun traipsed around the corner, simul-climbing here, pitching it out there. After five-and-a-half hours we reached the top and zipped down the rappels to the base.

Ten hours after leaving the car, we’d gotten back to it, changed clothes, and headed south to the border. Quebec City, its colonial spires dwarfed by modern intrusion, thrust upwards into the late-winter gloom. Dirt and road salt, stacked like levels of cake, layered the roadside snowbanks. We drank coffee and talked about books to write, places to go. It felt like perfect training for Alaska, where I’d head in a few weeks.

La Pomme on the ski out. It clouded over and got really warm.

The next morning the sun dappled through my bedroom. Alexa was in Colorado skiing for her winter break, and I shuffled around the apartment, thinking about running a few errands before my guiding duties for the weekend.

In a corner of my tired brain, I registered a faint smell of propane.

It really smells like propane, I thought out loud.

What the fuck!? I thought, grabbing my muck boots and sprinting outside. The propane line leading into the house shot flame. I dialed 911. The siding caught fire. Smoke billowed out the windows. People ran towards the building, urging me to get back. The propane tank could go up. I stood and watched, helpless, until a police officer asked me to sit in the back of her cruiser.

Five hours later, the Tamworth fire chief let me into our gutted building. Firefighters had had to evacuate the place twice as they battled the fire. Despite seeing your things burn, it was incredible to watch the men and women work. The chief was friendly. The fire marshal was nice, too. Both were climbers and they ogled our gear room. The chief let out a little whistle.

“This is a really nice apartment.”

I’d hoped to be ensconced in a basecamp in the Hayes Range of Alaska this week, sharing laughs with two of my favorite climbing partners, but the damage to our belongings and to my psyche was too much. And I made the (hard? It was pretty easy, really) decision to stay and try to find a new place, recover our belongings, and try and keep moving onward and upward. The weather looks amazing up there, and Ryan and Elliot are tough and fit. I wish them luck.

Two long weeks after the fire, I’ve learned some new things. I suppose minimalism always teaches lessons, whether it’s running low on food on a multi-day alpine climb or running low on belongings after a fire. 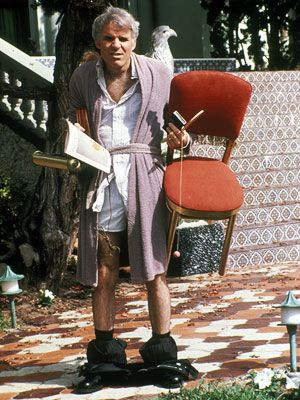 Figuring out what to grab is hard.

Steve Martin’s seminal comedy The Jerk has helped parse quick changes of fortune and loss of possessions better than anything else. As we sorted through our own wreckage, I kept coming back to the image of Martin, pants down, robe on, grabbing random things and muttering to himself as he begins his new life on the streets: “And that’s all I need, too!” And what about Bernadette Peters’ line? “Ohh Navin. It’s not the money I care about! It’s losing all the stuuff.” Brilliant.

Joking aside, a fire is scary, especially if propane is involved. Hard to sleep with a woodstove going these days. I keep having dreams of grabbing items to run away with. I think humor is a pretty good coping mechanism, though.

What I’ve most learned, or what’s been reinforced, at any rate, is how wonderful our community here is.

Bayard and Anne Skidmore-Russell clothed me. Ryan and Angela turned a scary experience into a kinda fun slumber party, and Jordan and Jeremy have taken us into their beautiful new home in Brownfield while we begin the excruciating task of looking for a place. Both Alexa and my parents put in sooty days of moving: wedding planning should be easy now! The wonderful Brady Callahan, Rick and Celia Wilcox and the rest of IME picked up the fundraising slack when we were too embarrassed to do it ourselves. The father of a climber Alexa helped rescue some years ago bought her a rope and a rack. Cheyenne and Brady got us a rope; Sammy got us slings/draws. Countless other people have donated, gotten us little tidbits we need, and helped us as we try to sort through what’s important and what’s not. We are so fortunate no one was hurt, that the help we needed was concrete, that our problems could be resolved. So many friends and acquaintances the past few years have had injuries or life-altering accidents. Please take the time and teeny monetary commitment to donate to the gofundme of an injured or lost climber. It could be you. And for those who have helped us, from the bottom of our hearts, thank you.