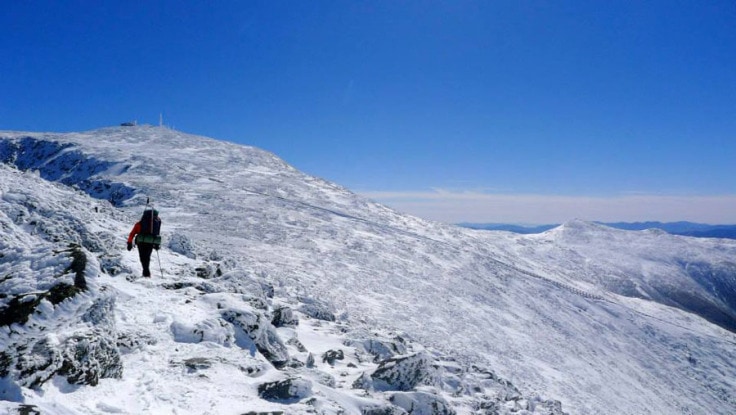 A photo from a Presidential range traverse in March, 2014. You can see the cog tracks, and where a hotel would go. Mount Washington can still feel wild sometimes…

On a mountain pocked with buildings, it is difficult to decide where, if anywhere, to draw the line. Mount Washington is not a “wild place.” On a busy summer day, thousands of people visit the summit. People bounce down on pogo sticks, drive up in snow cats, take trains and helicopters and cars and motorcycles to the summit.

In the wintertime, jean-clad city slickers swarm into Tuckerman’s ravine to blast music, somersault down the headwall on skis, and drink beers on the porch of one of Mount Washington’s many structures.

Amidst the chaos, though, resides another mountain entirely. I distinctly remember, at age fifteen, topping out on a wind-scoured Alpine Garden after climbing Yale Gully. Clouds, as they usually do, obscured the summit, and for a moment, as I slumped down in the snow, gaiters ripped, Daschein mitts soaking wet, helmet cocked to one side of my teenage head, I sat and stubbornly decided that mountain climbing was what I would do with my life. So now, when I top out on Huntington Ravine, fifteen years later, I still think of that. I’ve climbed mountains in places I’d only dreamed of, with men and women I’d only read about in books.

For me—and I suspect, for many others—our civilized little mountain has led us to many greater ones, has driven people towards resourcefulness and conservation, has engendered for many a sense of what the wilds of the world truly are.

The irony about seeking profit from building in a beautiful place—which is what the Cog Railway aims to do, with a 35 room hotel halfway up its tracks on the western side of the mountain—is that, with enough infrastructure, the place ceases to be beautiful. It loses the very draw the Cog wishes to further exploit.

I am aware—painfully aware—that Mount Washington has buildings already. But most of them have existed in one form or another for fifty or more years. To consider building another one is to travel backwards in mindset. 2016’s theme seems to be a painful reversion into a more destructive time, and there are certainly injustices occurring in our country which render this one insignificant, but if we can’t protect ideas and places on a local level, how can we expect to do so on a national one?

Is the Cog Railway so uncreative it needs to reach back to an antiquated idea to turn a profit? Do they plan to educate their guests about the fragile alpine environment outside of their 99-foot-wide swath of land?

New Englanders, unlike people in the Cascades or Colorado, don’t have another set of mountains they can turn to when one becomes overcrowded or too popular. We have buildings enough. Please don’t add any more.